CNYC held it’s AGM by Zoom in January. We nearly decided to go physical but wimped out.

It was heartening to hear our Commodore’s report of 2021, in which, as he reminded us, we had managed to enjoy several “real” meetings with dinner and a talk, as well as many virtual talks. The Zoomed events improved as we became accustomed to using the technology - some adopting Caribbean seascapes as their background, some zipping in and out of media-sharing to show slides or movies. Not the same as a pub, but kept us going and in touch through the year.

Financially we have kept our flag flying with no government support whatsoever, and have resumed membership subscriptions for 2022, after living off our hump for a couple of years. Even when paying for speakers, Zooming meant we had no travel, accommodation, meal, drink, top up, or CNYC mug to fund. The result we're meeting in the flesh and enjoying some great talks from guest speakers after dinner.

Above is an image of a member not just enjoying a good dinner and talk. He's enjoying being out on the water again sailing his Yarmouth 23, a heavily-built modern gaff cutter, romping along nicely under plain sail, in Greek waters. 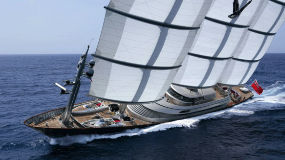 From the days of the Vikings, masts have been held up by stays, originally rope, even in Nelson’s day, more recently by wire. Traditional square-rigged ships split the sail area into several smaller sails, which required a large number of sailors to climb the rigging to set and take in the sails, with a forest of ropes both to hold up the masts and control the sails.  For super yachts, the solution has normally been to have 3 masts to increase the number of sails, but with a large sail on each mast. Starting with the iconic award-winning Maltese Falcon (292 feet long), Damon designed 3 free standing 200-foot carbon fibre masts rotating on bearings, with the square sails furled inside the masts and the angle of the sails controlled by electric motors rotating the masts. This has given this incredible yacht push button sailing. The same technology was then applied to the larger sailing yacht Black Pearl (106m), and the more controversial sailing yacht A (146m) currently impounded from its Russian owner.

Those were the days 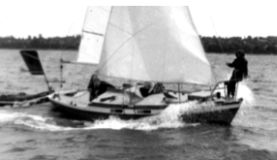 Dick Durham served on the last working Thames barge before writing for national newspapers and sailing magazines. He joined Yachting Monthly in 1998 as Feature Writer and News Editor and has travelled the globe in search of sailing stories. Still a big part of the magazine, his role is now Editor at Large.

Dick opened by telling us that the East Coast was the “third world of yachting “ and proceeded to entertain us with recollections, history and anecdotes covering boats he’s sailed or owned, foul-ups he and others have made, and the skippers and crew he’s sailed with. He did the voices, and had many of us laughing out loud (a rare event at the Chipping Norton Yacht Club). The coast, from the Humber to Dover, has 13 rivers, 60 creeks, a multitude of swatchways, and a vast number of wrecks to testify to the challenges some skippers had failed to rise to. There are hundreds on The Goodwins alone.

We who sail more-or-less modern boats forget that for a long time sailing boats had no engines. If wind failed and the anchor work was not brisk the tide would take you where it would. Perhaps into the side of an anchored naval vessel being painted at the time, a job not improved by an applique of hay, stuck to the wet paint.

Dick told us of the Deal boatmen who had fistfights on the beach over salvage disputes, of a brandy barrel that was found to be surprisingly heavy after all the brandy was drunk (owing to the dead monkey). He told us of Black Tail Spit (the East Coast Cape Horn), and of a horseman rescued from his swimming horse, which had to be tied alongside as no one could work out how to get it aboard. He showed us pictures of some of the wrecks, beacons, derelict Mulberry harbour components, towers and other strange structures that punctuate these swirling waters.

Most memorable was the reading from the Seagull owner’s manual that had many of us laughing rather hysterically. This very serious, rather pompous, and long-winded bit of prose announced that there were two sorts of Seagull owner - the sort that had no problems and the sort that had them in spades. It was absolutely no fault, it implied, of Seagull or the design or quality of its engines, that you were one of the problem-attracting set. You really should snap out of it.

Over a drink after the talk one of us asked Dick whether he could help us get a few words about our club into Yachting Monthly, and he said he’d be happy to receive something. Unfortunately (or fortunately) in the following week he told us he’d already written it. So keep an eye open for this in YM, around Christmas. We did stress to him he should not assume that Chipping Norton Yacht Club members had anything to do with the notorious Chipping Norton Set. We’ll see.

The Voyage of the Globe Star 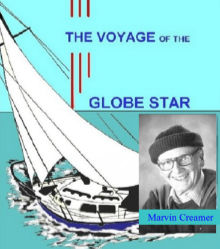 In an incredibly well-researched and well-illustrated talk Ex-Commodore Frances Miller told us about Marvin Creamer, who, in the early 80s, sailed around the world without compass, sextant, clock, watch or any electronic navigation aid - a unique and extraordinary feat.

We’d assumed this was a mad-cap, bravado exercise but, as Frances explained, it was well thought-through and planned. Creamer carried modern navigational and communication kit in a sealed bag for emergency use (never opened) and their position was covertly transmitted back home. So how was this done? Their principal source of positional information was star charts and knowing that the star directly overhead indicates where you are on the globe’s surface. Not easy to observe, from a small and heaving boat deck, and impossible under cloud cover, but you don’t need to know exactly where you are in open ocean. They knew about ocean currents and prevailing winds, had good charts, could estimate how far they’d sailed each day, and kept an eye open for other clues e.g. a land bird, or cloud formations on the horizon.