Max Liberson and the Vegetables

Max held us spellbound with his saga of the 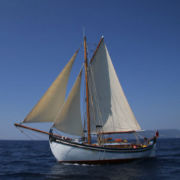 5-week delivery trip of CNYC member Barnaby’s Danish-built Greek sponge fishing boat Eleni from a mud berth in Maldon, where she’d spent 2 years being re-rigged and re-fitted, to Greece, via Biscay and the Med. Eleni is stylish, attracts admiration wherever she docks, and proved an extremely competent boat.
Was Max skipper, sailing-master, crew? At the start he called the shots, but as the voyage progressed Barnaby was promoted and by the finish Max was “just a deck hand”.  As had been intended.
They had B’s son, and a friend of his, crewing. Both were called Arthur so to avoid confusion they renamed one Dell. Dell, however, is not a carnivore, whereas Max most definitely is, and a small boat galley in a seaway does not lend itself to multiple-choice menus. They ate vegetables. Small things often come into exaggeratedly sharp focus on passage. We saw endless cockpit pictures of them eating vegetables; the consumption, provisioning, cooking and running out of which was a constantly recurring theme of his talk. Getting bigger laughs each time. Choice of crew is always fraught.
Congratulations to Barnaby for completing the project!

told us about the eleven extraordinary sailors who had rounded Cape Horn alone by the time twelve men had set foot on the moon. Why compare these? In both cases rescue was impossible, and getting home uncertain. When wondering where to look for potential astronauts NASA considered deep-sea divers, circus performers and sailors - before choosing Forces people already on the payroll.

Nicholas took us through pictures of iconic vessels, and steely-eyed men who’d completed this feat, from Al Hansen in 1936 through to Bill King in 1973. In between some of these intrepid heroes are household names (Francis Chichester, Robin Knox-Johnston, Chay Blyth) others, like Bernard Moitessier, are known to us sailors, and some even we would have struggled to name.

Nicholas knew many personally and had interviewed others, and had insights to share. Rounding the Horn is scary, with winds and seas creating what for many would be some kind of hell.

One famous astronaut spoke of "a small step for man, one great leap for mankind". For those who go to sea, rather than space, there's no greater step than rounding the Horn.

Sometimes you come across people you 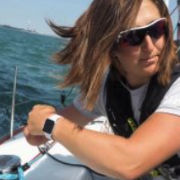 know you’ll never forget. Hannah Stodel, guest speaker at our March meeting, is one. Undaunted by having been born missing her right forearm, she started sailing aged 4, and the modest account she gave of her life saga was awe inspiring.

Having one arm makes tying shoelaces or peeling potatoes nigh on impossible, let alone tailing a winch. But it doesn’t have to curb ambition, which Hannah has in spades, and she leaves her disability ashore. The youngest ever winner of the BT Yachting Journalists Association Young Sailor of the Year award, Hannah has competed in the Disabled Sailing World Championships and represented Great Britain at the Paralympics in Rio, Beijing and London. She has many medals, some gold, to her name.

Hannah carved her Paralympian career with the Sonar, a one ton 23 ft Bermuda-rigged one-design keelboat that she raced as one of a crew of three (one of whom she’d first met in a Tesco car park, having observed him, a wheelchair user, helping another disabled person after a fall). The three of them were together as a racing team for 16 years, facing not only competition on the water but the restrictions, privations and emotional roller-coaster of being under constant pressure from fundraising, regulations, and the complete absence of any kind of normal life outside the bubble. Just managing to keep her weight up (you need mass to win races) was a challenge.

Hannah spoke of failure. Failure to measure up to one’s own standard and having to recognise one can’t always get a “gold”. Hannah spoke of the screaming frustration of an unfair penalisation, disqualification, and loss of a placing. Her mum at one point hung up all her medals to remind her that she wins.

Her latest venture is the 2020 Vendee Globe. Inspired to enter by crewing for Ellen MacArthur, she will become the first disabled woman to compete in it and (the real ambition) complete it. Her preparations have included a Yachtmaster course, and competing in the Length of Britain and Fastnet races. Her practice boat is a Class40 (a kind of Formula Ford equivalent).

Hannah has to find about £0.5m to buy an (old) Vendee Globe boat. These scarily fast 60 footers lack any creature comforts (a loo must be installed to satisfy regulations but need not work, as this would add a few kilos of deadweight). Her vessel will need some clever modifications to be workable with just one hand.

We wish her well, with winds fair and gear that holds up!

Gibraltar to Beirut the Slow Way

Many suns ago member Phil Levermore 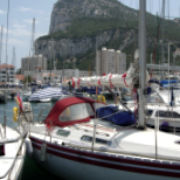 took a flight westwards out of Israel into the rays of the setting sun, musing to himself that those rays had lit the entire Mediterranean on their way to him. Ambition dawned to sail the full length of the Med, all the way to its East coast, and to sail it not in a dash but as a slow voyage of discovery to savour, and of which to later tell.

Phil’s Homeric ship, a Scanmar 345, was bought at the end of the last millenium, in 1999. In the first year with her he explored the Cherbourg peninsular, in the second and third he ventured down to La Rochelle, plugging back to the UK. The project was gaining traction. He would do this.

With two projectors (one for the photographs, one for the charting, a first for Chipping Norton Yacht Club) Phil took us over the many years and nautical miles of this impressive trek, with a variety of crew including, towards the end, other Chipping Norton Yacht Club members. This was not a single voyage but was interleaved with life at home, jobs (one lost), setting up a business, fatherhood, a divorce, and remarriage. His children, one first seen shown as a toddler on board, are now grown and bring partners along. Phil has a connection to a charity that supports kids at risk of educational exclusion, and has taken some of them as crew from time to time. Teenagers can be challenging but Phil had his techniques (give ‘em a job aboard, set ‘em to work!) and it was nice to hear that one lad has gone on into the Merchant Navy.

The voyages. Once round famed L'Aber-Wrac'h the southing across Biscay did not deter. The weather gods smiled. A stray pigeon was rescued. The excitement of the landfall in Bilbao was memorable among many foreign landfalls - they’re always exciting.

There were so many harbours. Vigo, Seville (in the town itself) where he wintered. By 2005 he’d made it to the Bay of Cadiz and thence Gibraltar, coinciding by happenstance with the 200th anniversary of the Battle of Trafalgar. As the champagne flowed, the spinnaker handling became less sharp. His daughters took a liking to the Costa del Sol. 2006/7 was spent pottering around Valencia and Ibiza, then to Majorca and Sardinia, ending with Rome and the Tiber.

And so year-by-year, he took in Stromboli, Malta, The Gulf of Hammamet and Sousse. His daughters grew up and joined with boyfriends, he met wife-to-be Rachel (who heckled gently from the audience). The Gulf of Corinth had been on his bucket list. Antalya in Turkey was quickly left as the coup and counter-coup broiled.

Through fair weather and foul, dealing often with helpful officials and sometimes the other kind, Beirut was reached by 2017. They bought nothing from the Hezbollah museum shop in case it might be viewed as supporting banned organisations. Beirut is beautiful - a sophisticated town with wealthy French ex-pat and Lebanese residents, rich in (hardly visited) antiquity. The nearby fertile Beka valley is known for its wines.

Phil rounded off by sharing wisdom gleaned from the trips: how to select a good cruising base, to research marinas, to deal with officialdom (be polite, however hard you are gritting your teeth), to entertain and manage children (from toddlers to teens).

A gripping saga, intertwining as it did rich sailing adventures and life, over nearly two decades. Might you be persuaded to write it as a book, Phil?

The voyage of the Liberdade

Mike told us a story of some indomitable individuals, linked through their sailing exploits.

The story started with Joshua Slocum.

Slocum, after being stranded in Brazil with his family, designed and built Liberdade, a shallow-draft junk-rigged 35 footer to sail home. Launched in 1888, she enjoyed a tiny 2’6” draft and her crew enjoyed a mere 3’6” of “headroom” below. Slocum, with his young family, arrived safely home after fifty-five days at sea. He then, between 1895 and 1898, completed the first ever solo world circumnavigation, in Spray, another yacht he had designed and built, to become one of the most famous sailors ever. Many of us in CNYC have read and indeed re-read his account of this voyage.

Slocum set sail in 1909 bound for the West Indies. He was never seen or heard of again.

Nearly a century later cancer-sufferer David Sinnett-Jones, his motor-racing career having been prematurely ended through illness and drastic surgery, took up sailing and started his adventures afloat. He sailed to Cape Town in 1981 in a 26ft Colvic bilge-keeler, to visit his daughter. As you do.

David then built a replica Spray, the Zane Spray in which he undertook a 3-year circumnavigation. As you do.

In 1995 he sailed Zane Spray to Horta where she unfortunately sank. Having failed despite great effort and ingenuity to re-float her (including getting help from a minesweeper to locate her, and building and employing a remote-controlled submersible), he built another boat, as you do. This boat was a copy (“not a replica”) of the Liberdade, using modern construction materials. 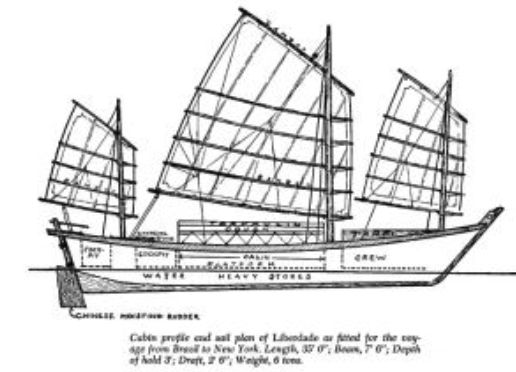 At this point our speaker, Mike Austin, joined the saga personally. Mike, another cancer-sufferer in remission, bumped into David and they decided to re-enact the voyage of the Liberdade from Paranagua, Brazil, to Washington, D.C. The timing was neat as the original voyage had been just a hundred years ago.

Mike recounted this voyage. With trips back to the UK for hospital treatments, they played the winds and currents up the coast of Brazil to Rio, and on via Antigua (luckily coinciding with Classics Week), the Oregon Inlet, the Dismal Swamp Canal (!) and Norfolk, at which point they had covered 1600 miles in 19 days.

Slocum’s trip is well known along the South American coast, and David and Mike were warmly welcomed, attracting press and TV interest. They were even more warmly welcomed when importing tins of baked beans, which are viewed as a great delicacy.

David did not live long enough to complete the voyage and Mike finished it single-handed. As you do.

An uplifting tale of grit, and of passion for life.

We were happy to make a donation to Southampton University Centre for Cancer Immunology, in lieu of a fee, as Mike had requested.