Still unable to meet, this year we tried something new to many of us, "Zoom Meetings"
Below are reports from those given so far.
Hopefully real meetings will be be allowed before the end of 2021.

After the success of our virtual AGM we 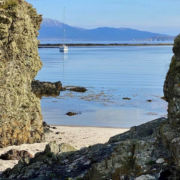 were treated in February to a zoom talk covering 5 weeks of glorious sailing in the Western Isles as the COVID restrictions were temporarily relaxed last summer.  Members Chris & Ann Adams visited (and beautifully photographed) all of the major Hebridean Islands covering more than 600 miles in their Hallberg Rassy - Swallow.  For once the weather was fabulous and sailing conditions superb, combining with stunning scenery and wildlife to die for - dolphins galore, whales, basking sharks, otters, puffins and eagles.  The anchorages were as uncrowded as always - social distancing is a way of life in these parts - and limited ferry capacity kept land based tourism down on even the larger islands.

As well as proving an excellent antidote to the first lockdown the talk was a perfect appetiser for the summer ahead.

Surviving war and weather in the Falklands

By way of a change from the usual 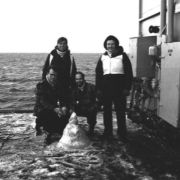 yachting topics, John Osmond presented his experiences in the South Atlantic in 1982 as a member of the Royal Navy Task Force sent to recapture the Falkland Islands from Argentina. Curiously the date of the presentation was the 39th anniversary of when Argentine ships would have been in the South Atlantic preparing themselves for the invasion of the Islands.

John made it very clear that the presentation was not a political comment at all but his own account of simply “being there” at a crucial period.

He was able to recount the experience of being “attacked” by an Argentine Air Force Hercules and how the Royal Navy mis-judged the ingenuity of the Argentine Air Force who had converted the C130H transport aircraft rather carefully using bomb racks under the wing where fuel tanks were normally fitted and then installing the fuel tanks into the enormous cargo hold of the C130.

John was able to bring some sense of the South Atlantic weather to the gathered yachting audience highlighting that at one point RFA Fort Grange had been experiencing Force 11 winds.

John’s ship, an RFA was home for 824 Naval Air Squadron C Flight where he was the Aircraft Engineering Officer - A Sea King Mk2 equipped flight -  from early May 1982 until October 1982.

At what we are hoping to be our last Zoomed evening talk Roger Barnes, of the Dinghy Cruising Association, eulogised about cruising and camping in little trailer-able boats.

Sailors and would-be sailors are faced with difficult compromises in their choice of boat and sailing grounds, especially if like many CNYC members, they live a long way from the sea, lakes or other expanses of attractive, navigable water. A large boat can tackle heavier weather and bigger seas, and can be comfortable, but either costs a lot of money and/or time to maintain and run. Smaller boats are undemanding but more limited in capabilities.

Roger evangelised about cruising in big dinghies. They can be kept at home, they can be trailed to different cruising grounds, in the UK or further afield, so avoiding long or aduous passages; they are responsive and fun to sail.

He threw down a gauntlet to those who have comfortable "big white plastic" yachts that spend (as he claims) most of their time in marinas.

Clearly there is some truth in his assertion that a great deal of fun can be had in a camping dinghy, and the ease with which it can be trailed to new cruising grounds does opens opportunities. Not all of were convinced that those benefits ouweighed the performace and comfort of larger craft, and as one of us pointed out, there are many smallish boats that offer a compromise; having a lid to keep the weather out but being small enough to venture into confined or shallow waters.

Each to his own - in any event carpe diem!

The Life and Times of the Shell Channel Pilot 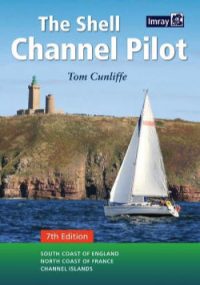 At this our first physical gathering since the start of Covid restrictions Tom Cunliffe joined us for dinner at the Blue Boar to talk about the Shell Channel Pilot, which he edits.

He inherited this well-known guide for yachtsmen from the swashbuckling Commander Johnnie Coote, who in turn had taken over from the legendary Adlard Coles. The guide was started 100 years ago as an Adlard Coles publication: “Sailing on the South Coast”. Later on Shell was persuaded to finance it and add it to their well-known land-based guides for motorists. This brought welcome cash to the table.

The agreement for Tom to take on this august pilot book was made after a good lunch and (an immoderate amount of rather good) claret at The Garrick Club. Not having owned a suit at the time Tom hired one but had to keep his legs under the table so the shortness of the trouser legs would not attract too much attention. It was a condition of the agreement that he wouldn’t use any of the current material, but start from scratch. Not a problem, with a Shell expense account on tap.

Tom had lots of amusing anecdotes to share. He’s done lots so has much to draw on.

He did most of the research, on both sides of Channel, in un-manoeuvrable, long-keeled old gaffers with ridiculous draft, with what he calls an egg-whisk for an engine - so he’s cared a lot about channels and depths. Took them personally. Sat aground from time-to-time, worrying, as one does.

One of the features of the book is recommendations around shore excursions to pubs and restaurants, many of which had to be put to the test. Many passed.

A great re-start to CNYC’s programme of talks. 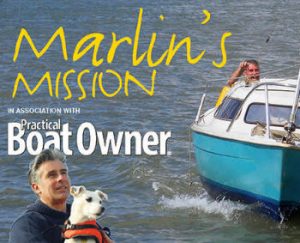 Well known Practical Boat Owner author, humourist and cheap boat evangelist Dave Selby entertained us in November at the second of our physical gatherings since the onset of Covid.

The jokes came thick and fast as he described his Sailfish 18 (feet not metres) in which he’d made an intrepid 338 nautical mile passage from Maldon on the East Coast to the Southampton Boat Show in a record time of 2 months (this being the record for the longest time taken for that passage, of course). He encouraged us to buy the book he’d written of the journey, not only for its own sake but as a unique example of a sailing book not written by Tom Cunliffe. The passage was done in little hops and to manage the fear of crossing the Thames Estuary he’d taken the precaution of sailing all the way in along the north coast of the Thames to Tower Bridge, crossing the river at that point, and then sailing out all the way along the south coast.

At the Boat Show he’d bedecked his craft with “Police Aware” notices - a trick he’s used before to get free moorings.

Dave is evangelical about how many cheap boats there are, as older boats have oodles of life in them but have depreciated down to being very affordable. He has catalogued 274 boats under £5,000 and noted how many of these had cost serious money when new - equivalent to buying an E-Type Jag - but now languished in the bargain basement. He claims to have been so successful in persuading people to buy old cheap boats that the Boat Show had to be cancelled for lack of interest. OK an aged Westerly Centaur may be almost entirely made of osmosis but that doesn’t stop it being a competent boat in which much fun can be had.

Towards the end of the talk Dave put on his serious face and moved on from humour to what he coined “the depressing bit”. In 2012 he contracted a rare condition called Guillain-Barré Syndrome, an auto-immune disease that affects the peripheral nervous system. He was paralysed from the waist down. Four weeks later he’d learnt that the variant he was suffering from was even rarer than had been initially diagnosed, and he lives his life in four and half week cycles, between blood transfusions (needing bloods from 800 donors!), to keep him alive and kicking.  Humbling stuff. The voyage along the South Coast in his little boat was in part to raise money for GAIN, the charity dedicated to helping people affected by the syndrome. (Donations can be made at www.justgiving.com/Dave-Selby-Marlins-Mission).