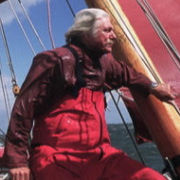 Jacques, who died this month after a long illness. James was one of the Club’s most distinguished members and will be greatly missed; Duncan extended condolences on behalf of the Club to partner Frances, who was with us in the audience. We look forward to hearing Frances tell us more about James, and their 15 year circumnavigation, at our October meeting.

Our speaker was Tom Cunliffe – a big man who has done some big and fairly intrepid things, many of them in big, heavy, traditional, boats. Tom’s theme was pilot cutters – boats that have a deserved reputation for seaworthiness, capability and elegance. He has owned several, pumped a lot of water through some of them, and was infectiously evangelical as to their virtues.

Many of us associate pilot cutters with Bristol, and although this is not wrong they are not limited to that part of the world, despite the Bristol heritage. The Bristol Channel has strong tides of large range, and few havens. Shipping needed the guidance of pilots, whose boats had to be capable of sailing (and heaving-to) in difficult waters, and being crewed by a man and a boy – sometimes just the boy. We heard about the privations and dangers of being a pilot and Tom recounted the example of a pilot’s wife, who had kept marrying pilots after she was widowed by them, one after t’other. Seven of them, apparently.

Bristol Pilot Cutters are solidly built, long-keeled, gaffers with counter sterns, low freeboard and a gentle sheer. The Norwegian variety tend to be double-ended, often Colin Archers. As to seaworthiness and sea kindliness Tom explained stability curves, which show how the righting moment of a vessel relates to its angle of heel. These curves, though factually correct in their own terms, are misleading as they only show what happens to a heeled boat statically, in flat water. The dynamic of a boat moving through lumpy water is something else. Typical pilot cutters have large moments of inertia deriving from their construction, ballast and heavy spars. This gives them a slow reaction to upsetting forces – so slow that the problem wave or gust will often have passed by before the boat reacts in a significant or dangerous manner, unlike many modern designs.

Modern boat designers tend to think in terms of accommodation and equipment – pilot cutters were built first and foremost as boats; then and only then did the builders work out what to put in them.

In attempting to defend against an accusation of working on the Sabbath on a boat, in Brazil, Tom had mentioned that Jesus was a carpenter. “Maybe so”, came the reply, “but he didn’t have a power plane!”

We were accused of having a bourgeois attitude to leaks. Tom sees no problem in having to keep pumping, as long as one can keep up, and the pump doesn’t fail. Admittedly he had to half-inch his young daughter’s plimsoll sole on one occasion to replace a leather flap-valve…

Around the world in 15 years 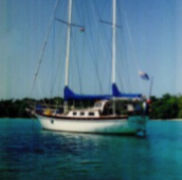 following much hard work by her and Rear Commdore Hugh Woodsend in gathering and shaping material into an exemplary   presentation.

James had planned a round-the world voyage for his retirement. He bought an  Endurance 35 ferro-cement (i.e. concrete) bare hull and spent 5 years creating the ketch, “Tara”, out of it.  Projects like this are incredibly time, money and effort consuming; and  are not for the faint hearted, impractical or pessimistic. James was clearly none of these.

After retirement from the Navy James joined a local authority and was, as it happened, recruited by Frances, who went on to became his companion – not only on this monumental voyage but for the rest of his life. Frances had sailed before -  dinghies, she told us, as a teenager in the Tripoli Dolphin Services' Yacht Club, in the days before Gaddafi.

The plan? To go! For how long? Well, it would evolve. Where to? Well, that depended on the weather, how the boat fared and which bits broke, where; what rebuilds they would do, what visas they could get…

The circumnavigation started conventionally enough with a transatlantic passage to the West Indies, but soon they decided to add Canada, the USA along the Intracoastal Waterway, and Bermuda to the itinerary before resuming the passage westwards through the Panama Canal and across the Pacific to New Zealand. Once in New Zealand, The Bay of Islands became a base from which to spend several years of cruising the Pacific Islands and Australia. I lost count as to how many times they shuttled between New Zealand and Australia…

The boat was rebuilt two and a half times during the voyage. One of the disadvantages of building ones own boat to a  budget, as James had, is that compromises often have to be made (in James' case, fitting a used Perkins 4108 diesel).  One of great advantages, however, is the intimate knowledge you’ve gained, so you can nearly always fix things, or know how to work around problems....

Frances' mother had grown up in Bermuda, and the couple seemed to have friends, or quickly make friends, almost wherever they went. So visiting places with family connections, picking up with friends, success in getting help, and long stays in port, were a core feature of this grand voyage. Fishing, on the other hand, wasn’t....they caught 10 fish in 15 years.

The return voyage took Tara round the top of Australia and on to South Africa, finally completing the circumnavigation in the Azores.

We have heard and read many times about the extent to which blue water cruising sailors value, and have to develop, self-reliance. But James and Frances seem to have taken this to another level. It seems they uniquely combined self-reliance, a strong partnership, and the ability to make friends and get help wherever they were. These are the enduring messages from this presentation. And it is good to be reminded that it is not only the young who have ambition, drive and ability. James was sailing well into his eighties, and even then did not “swallow the anchor”. Tara was sold and replaced with a Dutch motor boat, now in the South of France (and for sale - RB), in which they then cruised for several years, but that’s another story… 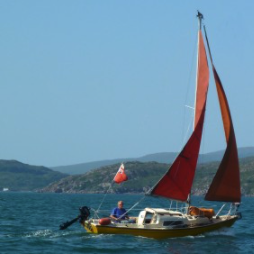 storyteller, columnist for Classic Boat and PBO and editor of the Marine Quarterly,  talked about Britain’s attitudes to, and relationship with, the sea.

Sam was the first CNYC speaker not to use visual aids. We did not miss them however, as Sam is an author by trade, and a wordsmith who can conjure up images with a well-turned phrase. His talk was humorous, personal, provocative, erudite and challenging-  refreshing, in a word.

Sam’s theme was the sea in the context of our island nation and not, as he put it, as a “bathing platform for the bourgeoisie”. He offered six perspectives: the sea as nuisance, moat, motorway, fishery, heritage and playground. He stressed the importance of understanding the sea, not from looking at it from the land, as though it were a backdrop to a watercolour, but by getting up close and dirty.  (My inelegant phrasing, not his – ed.)

Sam dismissed the moat perspective as being a ”Daily Mail” view… (politics showing, Sam?), and told us that the Navy still run those “useless 35 knot sharp grey ships” – frigates and destroyers – because one can’t rise to the rank of Admiral without commanding one. Rationally they’d be better off with less sexy craft, in the style of container ships, carrying helicopters.

We tragically waste the opportunity of the sea as a motorway, given how many small ports can still accommodate coasters. There are 150 that can take a 3000-ton coaster, he told us. Think of the lorries that could be taken off the road.

We have made quite a hash of managing our fisheries, according to Sam. He harked back to the day, long gone, when the then novel technique of trawling was outlawed, on pain of death. Not, he hastened to point out, that he favoured capital punishment.

Heritage? Pity we’ve spent so much parking the Cutty Sark aground on a greenhouse, when for the money we could have built one (and a half, he claimed) replicas that could sail.

As playground, ‘tis a shame, Sam opined, that 33% fewer people get out on the water than did 10 years ago. Sam has a strategy to reverse that, and get us all out there, and not just for a few minutes between yachtmaster courses. Sam’s teenage experiences included character-forming time at Les Glénans sailing school (“boot camp?”) with a languid Gauloise-chewing instructor, and he recommended the Glénans Sailing Manual to us. It transpires that Sam’s characterful Aunts were sailors, and did at some point sail around the world but didn’t want anyone to know, as that would be “showing off”...

We had some culinary advice, centring on ships’ biscuits’ tendency to rot if only cooked once and the meaning of “bis-cuit” - which is, naturellement, French for twice-cooked. That stops the rot. In the context of safety at sea and changing attitudes he told of the captain who insisted his crew wear lead divers belts, so that he wouldn’t have to waste time going back for them if the went overboard…

Sam talked of boat show paranoia, and the way the salesmen size up their victims. He dislikes big plastic boats, TVs on boats, marine mortgages (“you can’t call that freedom”), and inboard engines (outboards have the great advantage that when troublesome they can be taken off and sent away). Sam asked if any of us have experience of a Yuloh. None did. But at least one of us knows what it is, which is unusual. That’s Chipping Norton Yacht Club for you.